Realizing We Exist in a Simulation

As we enter the realms of science and pseudoscience, we realize that the quest (mission) is, and always has been, to figure out (remember) who we are and why we are here. Each of us is programmed to discover that truth in our own way. The age of technology was set in motion in the consciousness grids to help souls figure it out.

Elon Musk: Reality is a Simulation

Elon Musk: We are living in a computer simulation
Independent - June 2, 2016 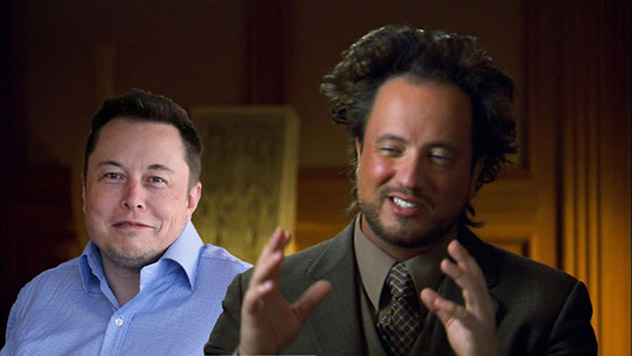 Last night, Elon Musk suggested that Earth is simply a simulation from an alien race's video game. Why would Musk say this? Because he is one of those aliens. It's easy to get a kick out of Musk's quirky quotes. But the closer you look at his words and actions, the more you'll start to see: He's an alien who came from another galaxy to help save humanity. Here's proof. SpaceX is just a front so he can have somewhere to store his own space transportation vehicles without raising suspicion. (All those failed launches - totally staged.) Why is Musk so hell-bent on getting rockets to leave our atmosphere? Because eventually, he needs to get home. Musk raised more than Stephen Colbert's eyebrows when he recommended that we drop thermonuclear weapons over the poles of Mars. Why would anyone want to lob nukes at an innocent planet? He claims it might warm the atmosphere up enough to make Mars hospitable. But he really wanted to destroy it. I mean, if your own race had long been at odds with the extraterrestrials that reside on Mars, youÕd want to blow them up, too. Maybe ItÕs part of the reason he came to Earth. Luckily there now seems to be some kind of treaty in place.

Musk: SpaceX to Launch People to Mars in 8 Years   Discovery - June 3, 2016
Elon Musk figures a crew can blast off aboard an as-yet-unannounced mega heavy-lift Falcon rocket in eight years following a string of unmanned missions beginning in 2018, the founder, chief executive and chief tech guru of SpaceX said this week. Speaking during an on-stage interview at the Code Conference in Rancho Palos Verdes, Calif., Musk dropped a few hints of what it will take to fly people to Mars, including a rocket with far more lift capacity that SpaceX's Falcon Heavy, which is expected to make a debut test flight from Florida before the end of the year.

"Person of Interest" - Reality is a Simulation

If you're like me you've watched Person of Interest over the last five seasons having embraced the experience and are saddened to see it come to an end ... yet anxious to see how it all turns out before it Fades to Black. "Person of Interest" hinges on government conspiracies and corruption mirroring the simulation of our reality. There's surveillance of citizens, murder and mayhem as A.I.s run the world/simulation/hologram. Man versus machine - who determines the final outcome? The answer is the creators. 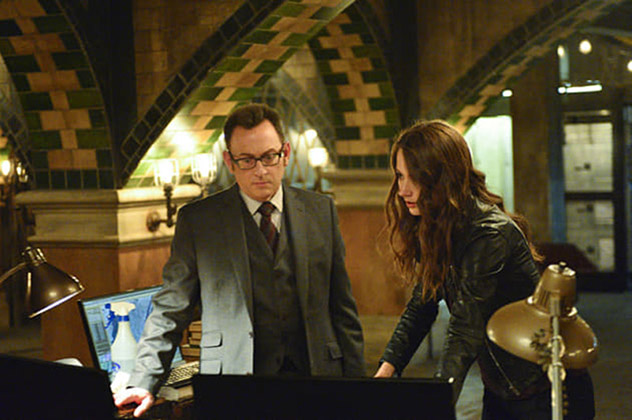 "The Day the World Went Away" was the show's 100th episode - and one of its most galvanizing. From the start we see Harold the Machine's creator (Michael Emerson) and Root the Machine's analog interface (Amy Acker) struggling with their philosophies and the future of the Machine or A.I. I actually went back to their intriguing dialogue at the beginning of the episode after watching the end. For me it's one of those episodes that I save and will watch over and over.

This was an adrenaline filled hour and a program game changer. Best of all was the stellar performance by Michael Emerson as he speaks to Samaritan (A.I.) at the end. He's been lost over the past year believing himself to be a man of principles now facing the consequences of his actions. Harold and his machine are about to go on the offensive as he gives her the freedom to make her own decisions. The death of Harold's friends becomes the catalyst for his transition into what remains for the final three episodes. Killed last night were Elias - yes we can love a Mafia boss from Brooklyn - and Root who "ascends" becoming the voice of Harold's machine and her namesake.

My favorite scene (36 minutes) - was Root explaining to Harold that we are all part of a simulation. In a chase scene with the bad guys Root turns to Harold and says, "The real world is essentially a simulation. Even if we're not real, we represent a dynamic - a tiny finger tracing a line in the infinite ..."

I am thinking if this guy is with Tesla then he knows his stuff. Skynet is coming ahhhhhh!!!!

Not sure what to make of it , it is fascinating though !!!!!!!!!     AI and Trans humanism are transforming . Into a sciencefiction movie haha of reality .

I find his statement "either we create simulation indistinguishable from reality or we will have ceased to exist" to be particularly thrilling and contrary to (and just the opposite too!). the doomed to destruction fearful scenarios drawn from denigration and defiance of ai and trans humanism. To me Silva and the like are simply pointing the way to something obviously inevitable, way ahead of the curve and this mans conclusions seem to agree.

I reject the transhuman agenda.  To me it is anti-life and against the Creator.  It is the insatiable drive for the Archons (i.e. artificial intelligence) to wipe out organic life in order to promote their own existence.  Transhumanism is not inevitable, and I will resist being microchipped, de-humanized, and roboticized.

3-D existence is not just an illusion; we came here to participate in its creation.  Time to wake up and do our part to change the destructive path the "puppets that be" have framed for us.

Well said Noa.  This enduring debate reminds me of a real cool esoteric doc I read some time ago that said the two primary hurdles and possible stumbling blocks for any developing humanoid species is and will always be the splitting of the atom and what is done with technology.

I sense that real intelligence resides with the indigenous elders on this planet, like the post you just posted about the Kogi Noa.  It is my wish that those indigenous peoples be the survivors of the die off for the good of the many (other species not bent on destroying their habitat)....

I've been thinking this for a while now - if we so-called "civilized" humans in the "developed" world (what an oxymoron!) truly cared about the good of the planet and it's remaining inhabitants, we would kill ourselves in favor for the good of those many other much less destructive, more cooperative human and non-human inhabitants in the flora and fauna planetary biodiversity.

and that would actually be a Jesus-esque positive thing!  When one honestly and soberly runs the numbers, its very hard to come calmly and rationally to any other conclusion...

The raw materials for robotic technology will still have to be mined from the earth.  Therefore, this "advanced technology" will do nothing to solve the destructive path we're on;  it will only ruin the earth's environment that much faster.

If the past is any indication, only the wealthy will be able to benefit from this technology.  It won't be readily available to the masses, and the poor will be at a technological disadvantage, as usual.

Dying is a part of living; it's what allows us to evolve.  Skip that step and we don't advance as a species.

If, one day, we are able to transplant the human brain into a machine, the soul will be left behind.  Therefore, the "real you" -- the part that makes you human -- your will and personality will no longer be a part of your consciousness.  "Humans" will be nothing more than a processor in a computer.

Artificial intelligence will never be as magnificent a creation as the human being.  It will never have our emotions, compassion, morality, senses, etc.  Eliminating what makes us human is a sad and bleak future.

Computing power and cognitive function is not the brain's only ability.  Why don't we focus on developing the 90% of our minds that is lying dormant?  I believe the greatest evolutionary path for humans is one where we develop psychic powers like telepathy and psychokinesis, where we learn to harness earth's subtle energy fields (like Tesla was doing in the early 1900s), and develop ways of living that work with nature instead of against it.  Then we won't have to dig up oil and toxic minerals and pollute the air to keep our machines going.

Today's civilization is not the most advanced society ever to inhabit this planet.  We need only look at the Giza pyramid and other megalithic sites for evidence of this.  These societies may have used levitation to build massive structures that worked in harmony with nature and honored Creation.  Why don't we turn our attention to trying to re-discover this forgotten genius instead replacing organic life with a facsimile?

In comparison, "modern" civilization is just a parasite on the planet. We think we're so smart as we rape, pillage, and pollute our only habitat.  Instead of understanding our place within the circle of life, we seek to eradicate nature, thereby sealing our own doom.  It's the height of arrogance and stupidity.

Artificial is seldom as good as the real thing. We humans, and the world we inhabit, would be better off if we recognize our inseparable connection to All There Is.  If humans stop living contrary to Creation and develop the "natural intelligence" that is our true inheritance, we wouldn't destroy our living environment.

Transhumanism is not a natural evolutionary process.  It is the opposite.  Embracing AI is a rejection of human nature and will not improve life on this planet.... IMHO.

Wires in the Brain:  https://www.youtube.com/watch?v=Pgmoz4f8LA4

Deborah Taveres on Mind Control (She backs up her statements with documentation.) : https://www.youtube.com/watch?v=E5aV_7k3PPo

The rise of the Machine: https://www.youtube.com/watch?v=opmh5IF9dZ8

Stephen Hawking on Politicking with Larry King addresses this subject and others
https://www.rt.com/shows/larry-king-now/348636-larry-kings-exclusive-con...

Elon Musk designed a space tent. Camping in Space now that is hoot! It is currently being tested by the International Space Station.

My first thought when I read the article was well, the Elite have an Exit Plan. They are going to camp out in Space during the Great Waves of Change. Even my tolerant Husband, thought that was "wackadoodles."

So, we shall see. They may or may not walk among us.

I am reminded of the old TV series "V" I only remember this TV show because I used to watch it secretly while my parent's were sleeping. Even way back then, I had a need to Know about the Aliens. Truth shows up in the strangest places.

I Bless All with Love--