In a world devastated by poverty, austerity cuts, and bank foreclosures, community action like Occupy Oakland’s recent attempt to turn a derelict building into a vibrant social center for the needs of the 99% should be applauded. Instead, the agents of the 1%, in this case the Oakland police – already under investigation for excessive force – once again attacked. Using flash bang grenades, projectiles, batons, tear-gas, and other weapons, police arrested over 400, bringing total US Occupy-related arrests to over 6,300. As the Occupy Oakland Media Committee said:

“With all the problems in our city, should preventing activists from putting a vacant building to better use be their highest priority? Was it worth the hundreds of thousands of dollars they spent?” 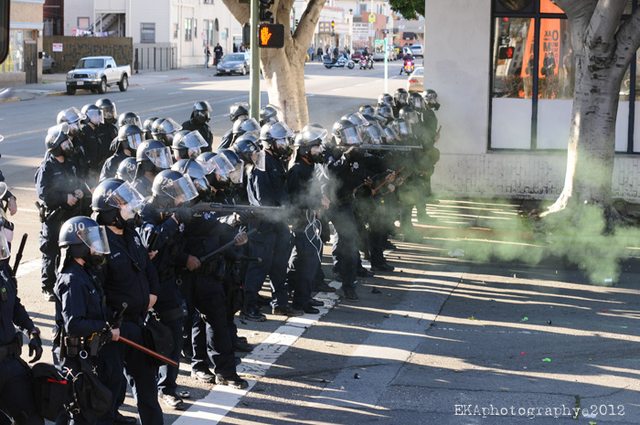 On Saturday, January 28, thousands of parents, families and engaged citizens gathered together to open a community center in the heart of downtown Oakland. The Police, under orders from Mayor Quan, responded to this peaceful demonstration of direct democracy and community building by arresting around 400 people. Hundreds more were injured when an army of officers marched on these unarmed families, raised their guns and fired bullets, tear gas canisters, smoke bombs, concussion grenades and other explosive devices into the crowd. Mayor Quan, on the same day as solidarity marches were organized by dozens of occupations across the nation, has called on the Occupy Movement to denounce Oakland’s show of bravery under fire and community strength. We stand with Oakland and call for the immediate resignation of Quan, who on Saturday made it clear that the state has abandoned democracy and joined the 1% in declaring war against the people.

Extreme economic injustice and true democracy can never co-exist. We have seen this violent truth before: in Pinochet’s Chile, 1990’s Russia, Suharto’s Indonesia. Four months ago, the Occupy Movement showed that this historical truth has finally come home: The economic oppression by the 1% has become so egregious that it cannot exist without destroying the spirit of the American democratic system. Across the country, people are rising up to demand a more just nation, and police brutality and state violence are the only things keeping this injustice in place.

In Oakland, thousands of active community members chose to engage in true democracy by supporting the real and pressing needs of the people. The state, which supposedly represents these people, exercised extreme police brutality and violence to protect the 1%'s vacant assets. The explicit goal of the action was to build community—to open a desperately needed community center with a library, medical care, free education and emergency housing in a city that has suffered massive budget cuts, high unemployment rates and ravaged public schools. In response, the city government poured hundreds of thousands of dollars, bullets and canisters of tear gas into declaring open war on these parents, students, workers, artists, teachers, children and veterans. These people’s only offense was to believe so deeply in the American tradition of democracy, self-sufficiency, and sacrifice for the next generation that they were willing to put their bodies on the line to make this nation the empowering democracy that we know it can be.

On Saturday, Mayor Quan's actions again demonstrated that open war has been declared on the spirit of democracy and the people of Oakland and this nation. We call for the end of Mayor Quan's administration and a regime change in Oakland. We continue to stand in solidarity with Occupy Oakland and will support them as they continue peaceful protest and community building until this and all other authoritarian administrations have been ousted from their place of illegitimate power. Together, we are building a stronger world, a stronger community, a stronger promise for the next generation.

Scary times. The police have been occupying my little town in central Mass. the last few days. I'm told they're doing some kind of training at the nearby state prison.

This morning I had a very foreboding dream that a large circular dark cloud was in the sky and you could see the stars (outer space) in the middle of it. I woke up afraid that the earths atmosphere would be sucked into outer space and we would all suffocate or freeze to death. I think this may be a fear of a CME from a nuclear missile blast. I'm open to anyone sharing their interpretation of this vision.

I am trying to keep visions of a happy peaceful world in my mind. Wishing peace for all.

While I don't condone the police actions in Oakland I will say I have a friend who's been going to Occupy Oakland everyday to film and stand in unity and he's fed up.  He's finally parting ways with Occupy Oakland because he said that a great majority of them want to be anarchists and get violent.  Try as he might to convince them that peaceful protest is a much more sensible and long lasting approach, that if you react violently you only give them license to do the same, they wouldn't listen.  And as you see in the video they are throwing things at the cops, inciting violence, bringing large shields.  I wasn't there.  I am only relating what my friend told me about how frustrated he was with the movement and how he finally had to call it quits.  He said they had a "Fuck the cops" rally and march every night.  I understand the frustration, especially after many of the things that have taken place, but come on.  Yet I've watched videos and the people interviewed usually have very valid points and seem to be coming from a place of peace.  So I don't know . . . are a few bad eggs ruining the Occupy Oakland movement for everyone else?

I don't always relate to the Terrance posts but I appreciate the calm yet excited perspective. You're right - it is an amazing universe!

i have never seen that one, and the quality is great !  As for the Terence quote, I like the detachment, the "observer" mode. That detachment sure does offer a clearer view of what's going on around us, and helps to keep one from getting caught up in all the actions, and reactions that are part of change.

I have been listening to Terence McKenna for years now, and much more again recently.  What I love about (the late Terence) McKenna's take on things is none of it is ever accompanied by belief of any kind.  He understands that belief is not necessary for Reality to be what it already is.  And what is not real does not deserve any time invested in the notion of belief.

The other thing I really love about Terence is that he would actually ask the mushroom questions about things like this (what's going on in the world today) while he was tripping.  One of the things the intelligent mushroom told him is that during accelerated moments of novelty, of new things coming into being, chaos is always part of that faster wave of evolution and transcending past old paradigms and forms, that that is how the Cosmos is.

This understanding helps me to reserve judgment more and stay centered and sober while things get what will and does seem like a bit weird and chaotic.  This would definitely include the current behavior of our species, as well as many other life forms on the planet, as well as Gaia Herself.

Terence would talk of getting very excited at times like these (and this is 10 years or more ago) because this kind of chaotic node manifestation is the threshold of the doorway leading to where we are all about to go along with the rest of the Cosmos intrinsically bound to the same ongoing novelty-birthing process....

Be excited, expect amazing things and miracles, and be an image of still smiling Peace while the natural process moves forward as intended.  While judgment is necessary for day to day navigation, unnecessary judgment can be a useless distraction at a time when we will want to be very sober and open to the amazing process we are neck deep in right now....

What an amazing Universe!!!!

"Be inspiration to the world around you".  That is the simple and profound thought that came to mind the other day while driving home (stoned).  It gave me the magical image of the World actually Being formed, Being Created around me as direct result of my Loving intuitive inspired observer interaction with "It"....

I wasn't there either, but I've been watching a lot of Occupy Oakland Livestream videos in real time.  I've seen a lot of unprovoked violence by the police against peaceful protesters.  I've also seen Black Blocs looking for any excuse to be violent.  Black Blocs are protesters dressed in black, who march  together, usually carrying long sticks.  At least one source I read said they are government plants, intended to give the police a reason to use force against the rest of the protesters.

In the case of this post, it could be that some otherwise peaceful protesters have reached their breaking point.  (I'm surprised this doesn't happen more often.)

The central point of this post is to illustrate the injustice of calling out police (in riot gear) against families trying to rebuild community in their own neighborhood.  The degradation of community is becoming more and more commonplace as schools are closed and basketball courts in poor neighborhoods are bulldozed to serve the elitist agenda.

Lest we forget, WE pay the salaries of the police and government workers.  They are our public servants.  Their job is to serve US.  This is just another example of the world being turned upside down.