Incredible -- Over 15,000 messages were sent in less than 12 hours on Thursday. The METI officials are set to move in at 7pm on Friday to clear the tents. In these vital last hours, let’s continue to stand with the Fukushima mothers and keep flooding Minister Edano with emails urging him to reverse his decision!

Posted: 25 January 2012
It's outrageous! -- the Minister of the Economy has just ordered the eviction of the Fukushima mothers peacefully camping outside METI to demand a radiation-free future for their children. We have just a few hours before police move in to tear down the tents, it's up to us to stop them now!

Minister Edano is bowing to bullying from the powerful nuclear industry -- they are furious that the brave mothers’ hard efforts are working. Their struggle has captured public attention and across the country people are speaking out to end unsafe nuclear energy. But their fight for their children's lives will be crushed unless we now all support these courageous women and stop their eviction.

We have only until 7pm on Friday! Let’s flood Mr Edano's inbox with thousands of messages now, calling on him to revoke his eviction order. It's time that our politicians put people and safety before profit. Send a message to stand with the Fukushima mothers now and help end the nuclear industry’s dirty tactics -- then forward this page to everyone:

had no idea this was happening.

I just learned of it as well.  I bless them with Love for thier courage is well noted throughout the world and is growing!  I bless you with Love!

Following up this article ..JP Gov is planning to remove the antu-nuclear tent in front of METI

To protect the tents, about 750 Japanese citizens gathered at the tents from 3 PM of the day.

Media and police came but because it became too busy, they could not remove the tents.

After all, staff from ministry of Economy, Trade and Industry did not even show up.

“Fukushima is still hell of radiation. We will not forgive Tepco managers to spend their luxury lives.”

It was almost like screaming. Anger and sympathy took over the place. 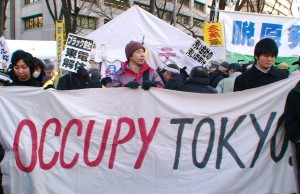 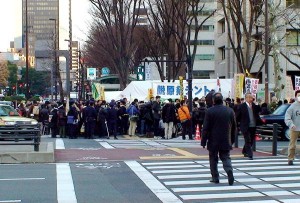 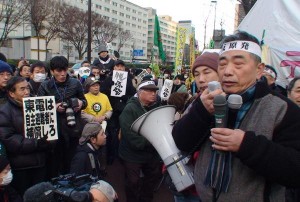 ↓A monk claims, it’s nuclear plants to remove. Not this tent. 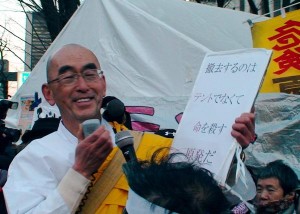 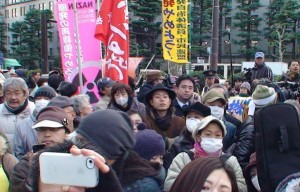 ↓Chant slogans to METI. (The board says, “Tepco compensate to people who evacuated spontaneously.”(The right one)   “Demise Tepco”(The left one).) 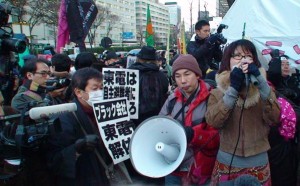 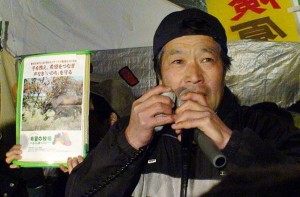 ↓Playing the traditional song and dance of Aizu Fukushima. 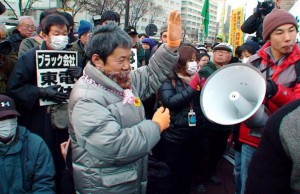 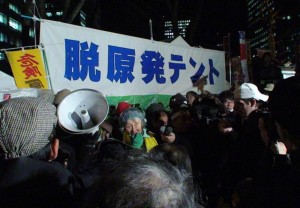 ↓A Fukushima farmer gave a speech.

He had his whole life destroyed.

Yet he can’t abandon their cattle.

I’m sorry for him. I can’t stop crying to watch it.

I guess this is enough to abandon all the nuclear power plants in the world.

He’s trying to find out the meaning of his collapsed life, but at the same time, he knows it’s already over too.

Nuclear took everything from him. This is the shout of the man who lost everything because of nuclear.

[Farmer's speech in Japanese.  Translation below.]

I’m the owner of the farm in Namie machi, where still 300 cattle are.
I live in 14 km area from Fukushima plants. I heard the explosion twice.
I saw the splashing ash and smoke with my own eyes.
I couldn’t abandon my cattle in the first week,.
On 3/17, I thought my cattle can no longer live long, made up mind going to Tokyo.
I came to Tepco’s head office with campaigner’s car on 3/18. I was the first one to do it in Fukushima.

Everyone, my cattle have no value as product. It’s zero. It’s completely meaningless to exist now.
They have been exposed to radiation, can’t sell them out anymore.
I told Tepco, I will definitely claim for damage.
and, pushing all the risk to self defense force and the Fire and Disaster Management Agency to settle it down, how dare you escape.
I claimed them as crying.

Stop Fukushima plants to die if necessary.
We need someone to die, someone must die to settle it down.

When I left my farm, I left a message,
Save our lives. This is our deadly struggle.
Unite.

Earthquake, Tsunami, and the nuclear plants to attack us.
Get fully prepared to die if necessary and try to settle it down.
We must fight, how dare you escape.
I still think so.

Now my cattle are deeply contaminated by cesium,
and my body is contaminated as much as them.
In 6 microSv/h, I feed them everyday.

They had a lot of babies.
Because of the lack of crops, and the cold weather,
they are dying one after one.

Spring will come, Summer will come, grass of ranch will grow again, I believe.
I want people to make the best of them for study of radiation exposure, decontamination,
and to have the huge dead rice field come back alive by using my cattle somehow in Futabagun.
I’m now trying to make the government, and The Ministry of Agriculture, Forestry and Fisheries develop the project.
I believe my cattle of hope will be useful for the recovery of Fukushima.
No more nuclear power to Fukushima.

However, I know it’s too late.
It’s already bad as Chernobyl.
Our town has gotten Chernobyl in it.
Who’s to blame ?
Who destroyed our life, and our future ?

I bless them all with Love.