I just received the below from MoveOn, as some of you surely have, too.  In this environment of deception and false-flag attacks, one wonders whether the guy who did this was really just a random disturbed individual or one of the mind-controlled patsies who have apparently committed many (if not all) of the terrible killings (attempted and successful) that we're all aware of here.

Notice that MoveOn's thrust here is gun control ("Mayors against illegal guns"), and we know that disarming the citizenry has been an aim of authoritarian regimes for a long time.  Also, MoveOn is an organ of one of the two arms of the One Party -- Democrat -- which is heavily supported by that geat humanitarian and compassionate visionary (

In any case, this Colorado tragedy gives one (me, anyhow) pause to consider whether the London Olympics are going to be the stage for another (maybe the last) big false-flag terrorist attack by the Elite before Dec., 2012, to horrify us all into the sheep pen of One World Govt.  Disclaimer: There's no intent on my part to reawaken fear and negativity, just airing possibilities so we aren't blindsided, just in case...  In fact, if we know that this could happen, we can meditate, pray, and in whatever way send positive energy so that the games go on peacefully..

The topic of the London Olympics as a possible 9/11 platform has been raised here already, given the incredibly lame and shoddy security preparations that have been underway there:

We all woke up to the tragic news of the killing of at least 12 people and the wounding of many more at a late-night screening of the new Batman movie in Colorado.

Reports indicate that the disturbed individual who committed this horrifying act had a bulletproof vest, used some kind of gas canister, and had multiple guns when he opened fire in the crowded theater.1 A three-month-old is among the injured.2

We are immeasurably sad for those who lost their lives, those wounded, and their families—and for all those who experienced the horror of those terrible moments. Let our thoughts and prayers go out to them today.

We're also so angry. From children's lives lost in school shootings, to Trayvon Martin, the Representative Gabrielle Giffords attack, and this latest slaughter of innocents, we are not safe from gun violence.

Mayors Against Illegal Guns has been campaigning to put a stop to senseless gun violence like this with commonsense measures, like fixing gun checks to keep guns out of the hands of dangerous people. They've started a petition in SignOn.org to demand action on ending gun violence.

Sadly, it often takes moments like these to bring politicians to their senses about guns. And while signing a petition seems so inadequate in the face of what happened last night, it's important to do what we can. Today that means taking a small step toward preventing this kind of tragedy from happening again.

Sign the Mayors Against Illegal Guns petition to our leaders: "Join me in standing with the victims and families of the Aurora, Colorado shooting and pledge to end gun violence."

The people who died at the Colorado theater last night are only 12 of the 34 people statistics tell us will die from gun violence today—and among 19,000 murdered with guns since the attack on Representative Giffords in Tuscon.3

And yet today isn't about statistics. It's about the pain of human loss—the loss suffered by the community of Aurora, Colorado. And the losses to gun violence suffered today and every day by other communities, whose tragic stories won't be covered on the news.

It's in the power of Congress to greatly reduce these senseless shootings and make tragedies like today's far less possible. They can start by enacting commonsense measures, like fixing giant loopholes in gun checks, that are supported by the vast majority of Americans—including gun owners.4

Let our anger today help give them the courage to act tomorrow.

Sign the Mayors Against Illegal Guns petition to our leaders: "Join me in standing with the victims and families of the Aurora, Colorado shooting and pledge to end gun violence."

The strength and support we draw from our friends, families, and communities are never more important than on days like today.

Thanks for all you do.

–Justin, Robin, Ryan, Elena, and the rest of the team

Want to support our work? We're entirely funded by our 7 million members—no corporate contributions, no big checks from CEOs. And our tiny staff ensures that small contributions go a long way. Chip in here.

PAID FOR BY MOVEON.ORG POLITICAL ACTION, http://pol.moveon.org/. Not authorized by any candidate or candidate's committee. This email was sent to Robert Brown on July 20, 2012. To change your email address or update your contact info, click here. To remove yourself from this list, click here.

Yea it's kind of convenient timing with Obama wanting to sign the U.N. arms treaty in the near future. Strange that he could get inside through the emergency door exit (couldn't that only be unlocked from the inside?) and he had all that equipment. If it wasn't a false flag then I'd blame T.V. and violent video games more than the guns.

Yeah Bob, that was my first reaction, too.  Knowing about MK Ultra and other mind control tactics, I now second guess each such past action.  Sure, some shooters could have a screw loose or maybe they were pushed too many times to the edge of sanity.

But it's equally plausible that some killers are programmed and manipulated by the dark puppet masters.  (The string-pullers have been experimenting with the populous for decades -- or longer.)

And although none of us wish tragedy upon the London Olympics, it brings me some comfort to know that more and more people are waking up and questioning what may lie behind the curtain.  Covert black ops are getting harder and harder to pull off without some public awareness.

I feel certain that the dark days are numbered and coming to a timely end.

For some reason this video of James at science camp only shows bits and pieces of his entire talk but it does mention "temporal illusion" and "subjective experience". I've been searching around to see if I could find the video in it's entirety - no luck so far.

I was able to grab these 2 names off the video:

It seems that they are consciousness researchers. Interesting stuff but I'm not sure they would be necessarily into mind control.

Great website, Wendy.  Did you see these other headlines?

And if you haven't seen this shocking post on subliminal TV messages (aka mind control) take a look at this:  http://www.gatheringspot.net/video/general-discussion/subliminal-message-accidentally-photographed

Ok and throw on top of all of this information, this article I read today.  I cannot find anywhere else where Robert Holmes is listed to testify in the LIBOR case, but who knows....

Also check out this photo that came along with the article...things that make me go hmmmm.... 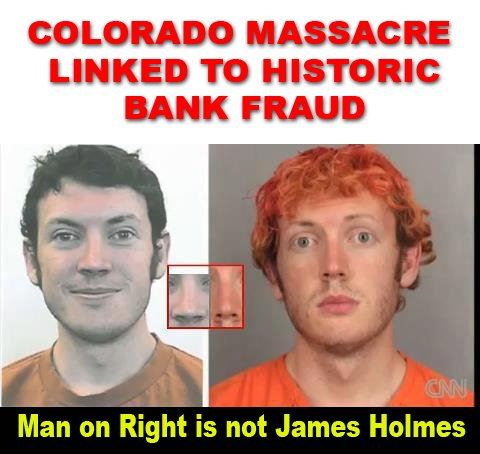 Thanks for adding your info, b2.  That article is quite telling... "Most important to note about James Holmes, however, this report says, is that his father, Robert Holmes, was said to have been scheduled to testify within the next few weeks before a US Senate panel on the largest bank fraud scandal in world history that is currently unfolding and threatens to destabilize and destroy the Western banking system."

I hope this means that more people are getting wise to the games.