Exposure to WTC Dust not Compensated by 9/11 Health Program 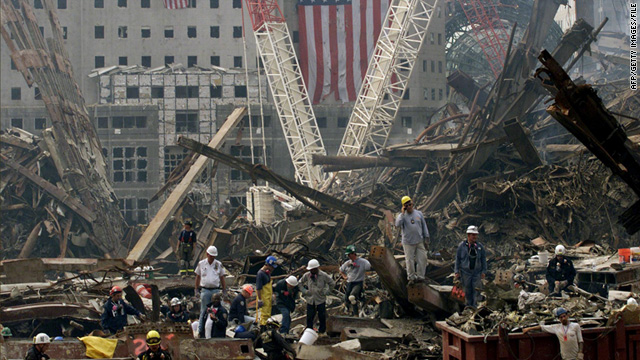 Rescue workers search for survivors in the rubble of the World Trade Center in New York.
STORY HIGHLIGHTS
RELATED TOPICS

There is inadequate "published scientific and medical findings" that a causal link exists between September 11 exposures and the occurrence of cancer in responders and survivors, program Administrator John Howard said in a statement.

The decision forms part of the first periodic review of what the James Zadroga 9/11 Health and Compensation Act will provide.

After a lengthy battle, President Obama signed the $4.2 billion legislation in January to provide health care for those who helped clear the rubble and search for human remains at the World Trade Center site in New York.

"As new research and findings are released, we will continue to do periodic reviews of cancer" for the program, Howard said, with the next review expected in early to mid-2012.

Some of the New York lawmakers who originally hailed the legislation are now speaking out against the exclusion of cancer.

"As the sponsors of the Zadroga Act, we are disappointed that Dr. Howard has not yet found sufficient evidence to support covering cancers," Democratic Reps. Carolyn Maloney and Jerrold Nadler and Republican Rep. Peter King, who wrote the act, said in a joint statement.

"This is disappointing news for 9/11 responders and survivors who tragically have been diagnosed with cancer since the attacks and are suffering day to day and awaiting help," they said.

"So many people have gotten such rare cancers -- and at such young ages -- that it seems obvious there must be a link," Democratic Sen. Charles Schumer said in a statement.

He labeled the report "premature" and said revision will "demonstrate that those who were exposed to the witches' brew of toxins at ground zero have developed serious illnesses, including cancer, and deserve justice."

Many survivors are similarly disheartened.

"It's very disappointing, very heartbreaking," said Reggie Hillaire, who was diagnosed with multiple myeloma cancer in 2005.

Doctors told the New York police officer, who's 34, that developing such a cancer was "really, really rare so young."

"I've met so many people who were police officers at the same time who have these cancers, and we're all about the same age."

Hillaire, who worked at the site for 11 days and then at the Staten Island Landfill for 63 days, has also been diagnosed with thyroid cancer.

Cancer treatment being covered by the program "would have brought some closure. ... It feels like it's never going to end," he said.

...that the towers were destroyed with energy beams, you start to understand that the molecular structure of all of that debris was cahnged into something that we don't understand. It could easily cause new and deadly cancers. Our free will as a collective must be adjusted to bring in life affirming technologies and vibrarions. Only we can do it!

This is good news, as something is better than nothing, but it's a shame it doesn't cover cancer. You have asbestos mixed with cement dust - no need for energy beams to give people lung cancer.

A new study has provided potentially groundbreaking evidence of a link between exposure to toxic debris at New York’s Ground Zero and the development of cancer. The medical journal, The Lancet, reports male firefighters exposed to dust and smoke at the site of the 9/11 attacks have a 19 higher percent risk of developing cancer than colleagues who were not exposed. The finding comes just one month after the National Institute for Occupational Safety and Health issued there is insufficient evidence to draw a link between the 9/11 site and cancer. Firefighters and rescue workers have been unable to receive payments for cancer treatments because cancer is not covered under legislation providing care for 9/11 responders.