I'm always lary about passing along anything Fox reports as news, but this story is rather noteworthy. ~Noa

A colouring book for children which depicts scenes of terrorism related to 9/11 - including pictures of the burning twin towers and the execution of a cowering Osama bin Laden, has provoked outrage among American Muslims.

The book - entitled We Shall Never Forget 9/11: The Kids' Book of Freedom has just been released by the Missouri-based publisher Really Big Colouring Books.

They market the book as a 'tool that parents can use to help teach children about the facts surrounding 9/11'.

Scroll down for video 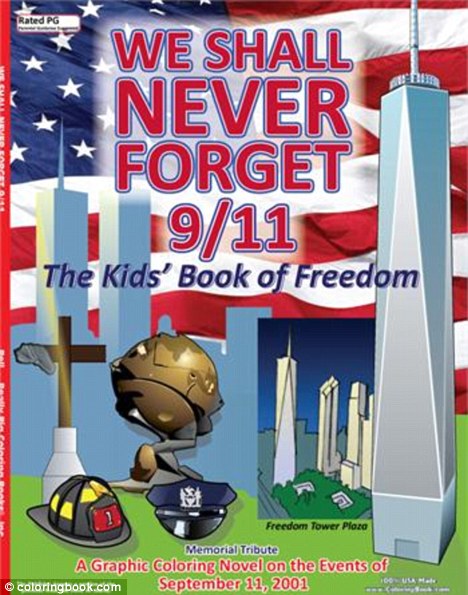 Cover: We Shall Never Forget 9/11 Kids Colouring Book sold out of its first 10,000 copies after being launched online for $6.99 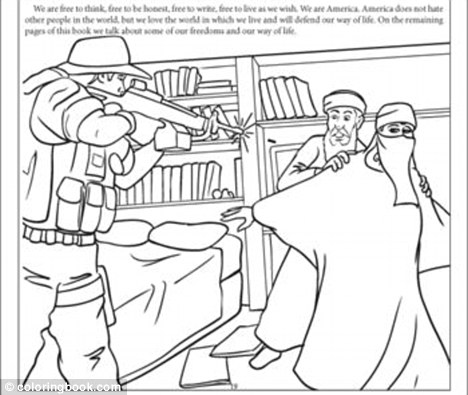 Raid: One of the colouring pages showing a terrified bin laden cowering behind one of his wives as a Navy SEAL shoots at him

Showing scenes from 9/11 for children to colour in and telling the story of the attacks and the subsequent hunt for Osama bin Laden, 'the book was created with honesty, integrity, reverence, respect and does not shy away from the truth', according to its publisher.

The website also says it sold out of its first print run of 10,000 copies.

One of the pages of the book depicts a Navy SEAL aiming a gun at a terrified OSama bin Laden who is seen to be cowering behind a hijab-wearing woman meant to be one of his wives.

The text accompanying the picture says: 'Being the elusive character that he was, and after hiding out with his terrorist buddies in Pakistan and Afghanistan, American soldiers finally locate the terrorist leader Osama bin Laden.

'Children, the truth is, these terrorist acts were done by freedom-hating radical Islamic Muslim extremists. These crazy people hate the American way of life because we are FREE and our society is FREE.'

Wayne Bell, publisher of Really Big Coloring Books, Inc, in St Louis, says that the book is a memorial tribute as the tenth anniversary approaches.

'It is an informational piece to help educate children on events on 9/11,' Bell said. He added that it is 'a simplistic, honest tool'.

As he describes it, the book is a 12-hour narrative of the events that happened on the day that forever changed America. Kids can colour in the twin towers, Navy SEALS and former president George W. Bush.

The graphic novel depicts the attacks by showing mourning Americans and alluding to the patriotism that brought the country together. 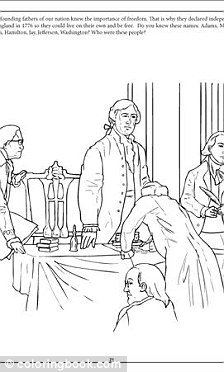 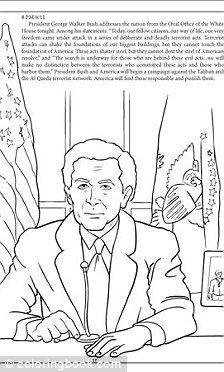 In his interview with ABC News, Bell mentioned the songs included in the book, such as God Bless America and how the book quotes President Bush saying: 'These acts shutter steel but they cannot dent the steel of American resolve.'

The Council on American-Islamic Relations has condemned the book as 'disgusting', saying that it characterises all Muslims as linked to extremism, terrorism and radicalism.

They said this could lead children reading the book to believe that all Muslims are responsible for 9/11, and that followers of the Islamic faith are their enemies.

Ibrahim Hooper, communications director for the organisation, told the Toronto Star that 'America is full of these individuals and groups seeking to demonise Islam and marginalise Muslims and it's just a fact of life in the post-9/11 era'.

Nonetheless, he expressed his hope that 'parents would recognise the agenda behind this book and not expose their children to intolerance or religious hatred'. 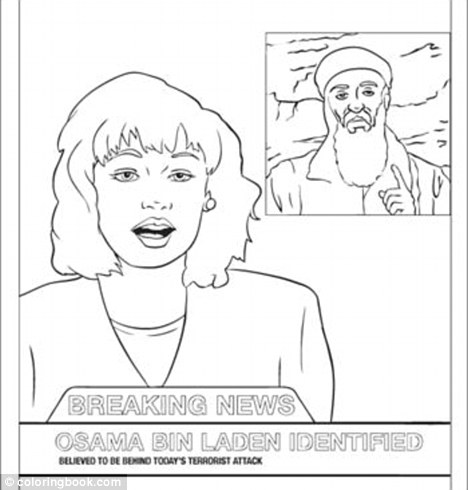 Breaking News: A reporter is shown telling the world that bin Laden was behind the attack 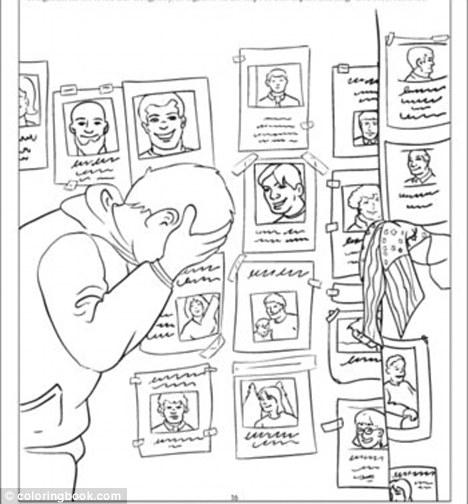 Poignant: Americans mourning over the loss of their loved ones at Ground Zero is another graphic image

Dawud Walid, the Michigan representative for the Council on American Islamic Relations, said that  instead of finding hope in the colouring book, he found hate.

Referencing part of the book that refers to the jihadists as 'freedom-hating radical Islamic Muslim extremists', Mr Walid notes that nearly all of the mentions of Muslims in the book are accompanied by the words 'terrorist' or 'extremist'.

'Little kids who pick up this book can have their perceptions coloured by those images - it instils bias in young minds.'

Mr bell said about Mr Walid's criticism: 'This is about 19 terrorist hijackers that came over here under the leadership of a devil worshipper, Osama bin Laden, to murder our people.

'All these characters are painted to the mind of a young person that perhaps all Muslims may be somewhat responsible for 9/11 or that Muslims are an enemy.'

Really Big Colouring Books said that it will donate a portion of its proceeds from sales of the book to Bridges for Peace, 'a Jerusalem-based, Bible-believing Christian organisation supporting Israel and building relationships between Christians and Jews worldwide through education and practical deeds expressing God's love and mercy'.

Disgusting!  That is all I have to say to that!