Terror law is attack on all our freedoms, says spy writer Le Carré

from the Daily Mail, UK:

Terror law is attack on all our freedoms, says spy writer Le Carré in furious tirade against ministers 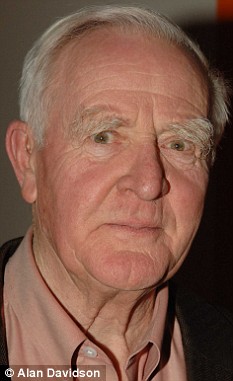 Spy
novelist John Le Carré has criticised the Government for 'stripping'
away British civil liberties due to the threat of terrorism.

The
76-year-old author and former MI6 agent, who rarely speaks publicly,
slammed ministers for voting to extend the 42-day limit that terror
suspects can be held without charge.

Le Carré, who admitted he
had been labelled an 'angry old man', said: 'Partly I'm so angry that
there is so little anger around me at what is being done to our
society, supposedly to protect it.

'We have been taken to war under false pretences, and stripped of our civil liberties in an atmosphere of panic.

'Our
lawyers don't take to the streets as they have in Pakistan. Our MPs
allow themselves to be deluded by their own spin doctors, and end up
believing their own propaganda'

Le Carré, whose 21 books include
The Constant Gardener and Tinker Tailor Soldier Spy, added: 'We haul
our Foreign Secretary back from a mission to the Middle East so he can
vote for 42 days' detention.

'People call me an angry old man. Screw them. You don't have to be old to be angry about that.

'We've sacrificed our sovereignty to a so-called "special relationship" which has nothing special about it except to ourselves.'

He
was speaking yesterday in an interview with Waterstone's magazine, just
weeks ahead of a key vote in the House of Lords that could see peers
throw out the controversial 42-day proposals.

The writer was one
of several figures from the arts and academia who wrote to Gordon Brown
in March to protest at the 42-day detention limit.

The open
letter, which was also signed by author Iain Banks and fashion designer
Vivienne Westwood, warned that 'relations could suffer if the Muslim
community appears to be... targeted for prolonged pre-charge
detention'.

Campaigners and opposition MPs have suggested that the terror vote in the House of Lords on October 13 will be very close.

Le
Carré said his latest book, A Most Wanted Man, explores the struggle to
find a balance between individual rights and state security.

Published
today, it tells the story of a half-Chechen, half-Russian Muslim
refugee who is living in Hamburg and being tracked by a series of
special agents, who suspect that he may be plotting a terrorist attack.

The
author - whose real name is David Cornwell - revealed last week he had
been tempted to defect to the Soviet Union during the Cold War because
he was curious to know what it would be like working for the Russians.